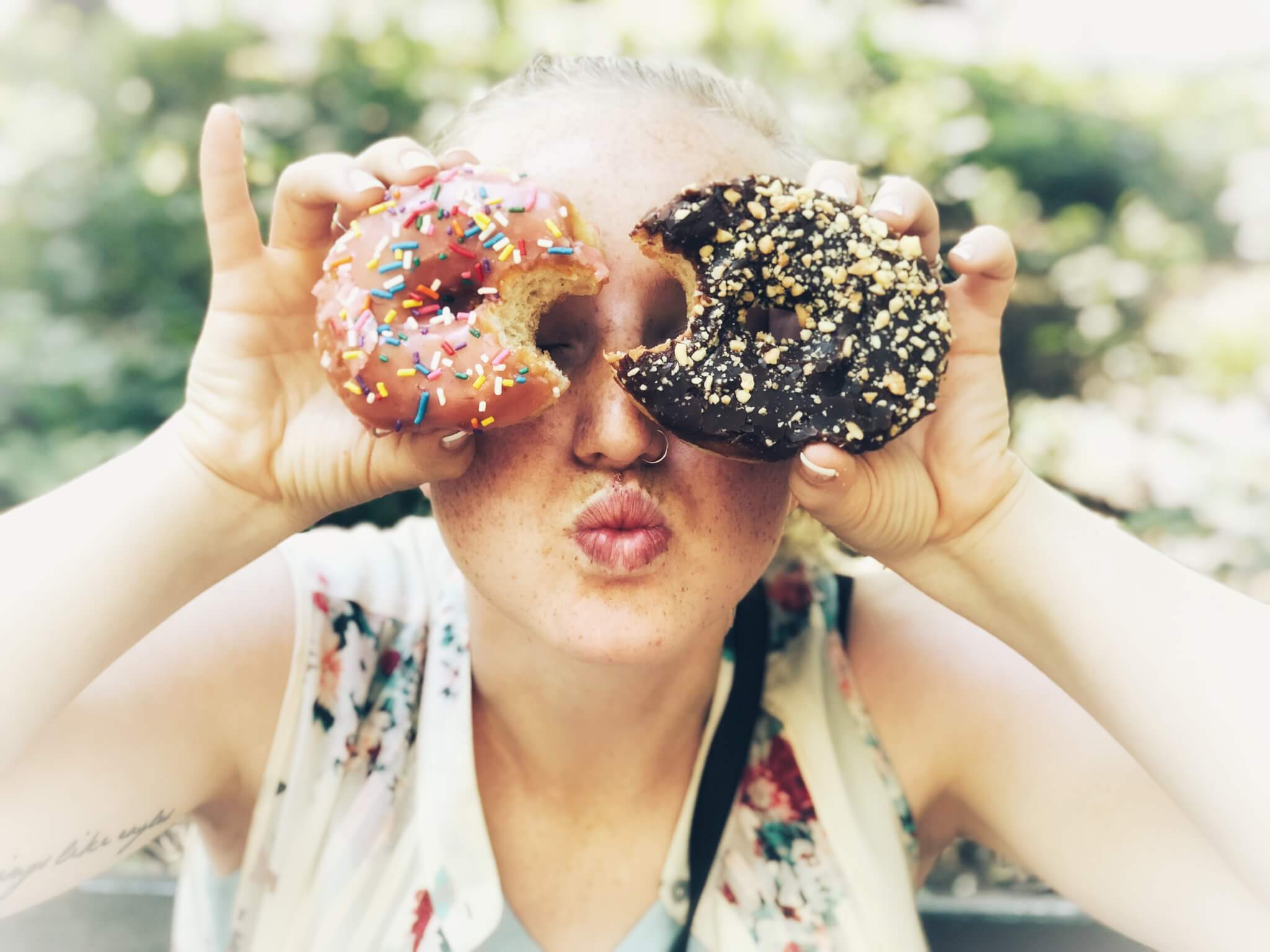 Last month my husband and I went on an amazing jam packed honeymoon to New York City. I for one was thrilled on our destination because I heard that NYC is one of the most vegan and vegetarian friendly cities in the world! I was not disappointed. In fact, everything I read before going and everything I ate there, made me basically drool the whole time. Here’s my Vegetarian NYC Guide for your next trip to the Big Apple!

Note: I was only in NYC for four days so this is definitely not the be all and end all of the many vegetarian and vegan options there are in NYC. Like I said, it’s one of the world’s most veg-friendly cities so while four days just barely scratched the surface. Not to worry though, I’ve also included a list at the end of veg-friendly places I want to visit the next time I’m in NYC.

Breakfast is by far my favorite meal! I should point out that I still eat eggs but I don’t eat much dairy as I’m lactose intolerant. Regardless, I am one of those people who hates skipping breakfast and loves to pair everything with a good latte.

Even though we were only in NYC for three breakfasts we had two of them at Le Pain Quotidien. The food was absolutely incredible. The first breakfast I had there was the Skillet Eggs with Avocado and Crispy Onion. It was so savory and basically just the perfect comfort food for the morning. The next time I went there I got the Sunny Side Breakfast Bowl which comes with ancient grains, Brussel sprouts, avocado, a sunny side up egg and more goodness.

One thing I loved about Le Pain Quotidien is how sustainable they are as a restaurant. Every waiter’s uniform was made of 100% organic cotton (they’re sleeves said so). Plus they used as much local and organic ingredients as possible. They even had a sign in the location we went to that said that the company offsets their carbon and they have goals to become a fully carbon neutral global company by 2020. I was so happy to find out that Le Pain Quotidien also just opened in Mexico City as well so after coming back from NYC we ate there again but in Mexico.

The other breakfast we had in NYC was at The Best Bagels & Coffee. The name basically describes itself and it really must have been the best because the place was super crowded. We actually had to wait in line twice because there are two line ups there and we got in the line up to pay instead of the line up to order at first. They had so many different kinds of bagels to choose from and I knew we couldn’t come to NYC without getting a good bagel. I don’t remember what mine was called but it had tomato, avocado, lettuce and a bunch of other delicious stuff in it. It was kind of messy and hard to get a table but once we got one it was well worth the wait.

Eataly at the World Trade Centre

Arturo and I both had such amazing vegetarian meals at Eataly in the World Trade Center. Eataly is a set of restaurants and also an Italian grocery store chain full of tasty Italian goodies. I ordered a beautiful and refreshing quinoa salad while we were there and Arturo had a simple yet deliciously comforting pasta dish. We shared each others’ food as it was all so good.

The food at the Brooklyn Diner was incredible. It’s a pretty famous diner and normally I would be worried about finding veggie options at a diner, but luckily they had the most amazing veggie burger for me! We had dinner at the Brooklyn Diner on our first night in NYC after a long flight and it hit the spot perfectly. I was so full after I had to keep taking breaks to sit down as we walked around Central Park.

Beyond Sushi was one of my favorite restaurants in NYC. Everything there was either vegetarian or vegan and it was delicious. Arturo isn’t a huge sushi fan and even he loved his veggie dumplings. I ordered the four piece sampler because it was way too hard to choose just one roll of sushi. I also ordered the coconut curry starter soup. This was literally the best vegan sushi I’ve ever had. In fact writing about this now is making me want to book a flight back to NYC just for the sushi!

After seeing this episode of the Tonight Show where Cate Blanchett gives Jimmy Fallon a Superiority Burger, we knew we had to go check it out. What we didn’t realize was that Cate Blanchett must have gotten the staff at Superiority to make a much larger burger than what they normally serve. When we first went in the prices seemed kind of low for New York and after leaving with our take out we realized it was because the burgers are more like the size of sliders. They were absolutely delicious though, so if you go to Superiority, be sure to order two to three burgers each instead of just one like we did.

The Very Best Restaurant We Ate at: Hangawi

If you are vegetarian or vegan and you’re going to NYC, you absolutely have to eat at Hangawi. My friend, Rebecca, recommended that we go there and I’m so happy she did. Hangawi is an all vegetarian Korean restaurant with the most amazing food. I can honestly say it was the most amazing Asian food I’ve ever had. I can’t really say it the most amazing Korean food I’ve had but that’s only because it was my first time eating Korean food ever! Even Arturo, who is almost as carnivorous as they come, loved every single bite.

Not only that, but the whole restaurant atmosphere was beautiful as well. Everyone takes their shoes off as they enter and the tables are low to the floor. There’s mood lighting which was very romantic (albeit not so great for food photos) and we just had the best time. We were originally going to go to Peacefood to get vegan cheesecake after, but we were pretty tired. Instead we ordered vegan cheesecake from the Hangawi menu. It was the best cheesecake I’ve ever had, and that’s including cheesecake from before I developed lactose intolerance!

As someone who is very lactose intolerant, I also wanted to find some good vegan deserts. I already mentioned that Hangawi had a wonderful vegan cheesecake, but we were also able to find amazing vegan donuts and ice cream in NYC as well.

These donuts were absolutely incredible and they had the most amazing flavors. My favorite sweets ever are anything that combine peanut butter and chocolate and luckily for me, Dun-Well had a peanut butter chocolate donut. I also had the Homer Simpson donut as well which was super tasty too.

Oh my goodness, the vegan ice cream at Van Leeuwen was to die for. When trying to choose dairy free choices, I mostly have to go with the sorbets and fruity flavors. While these are always great, I much prefer chocolatey and nutty kinds of sweets and ice cream is no exception. I was thrilled to find out that Van Leeuwen had a vegan peanut butter chocolate chip ice cream. Plus they had vegan chocolate sauce that I got to order as a topping too. The line up outside was Van Leeuwen was so long it went right out into the street and it was no wonder why.

Vegetarian NYC: Restaurants I Want to Try on My Next NYC Trip

I really only just scratched the surface on all the amazing vegan and vegetarian food there is to eat in NYC. Here’s a list of some of the places I want to visit on my next trip to New York City.

Did I miss a really good vegan or vegetarian spot in NYC? Let me know in the comments!

Author: April
Filed Under: USA
Philadelphia PA: Fun Things to do in Philly
20 Photos of the Bushwick Street Art in NYC that’ll Make You Want to Visit