14 Incredible Things to do in Guanajuato 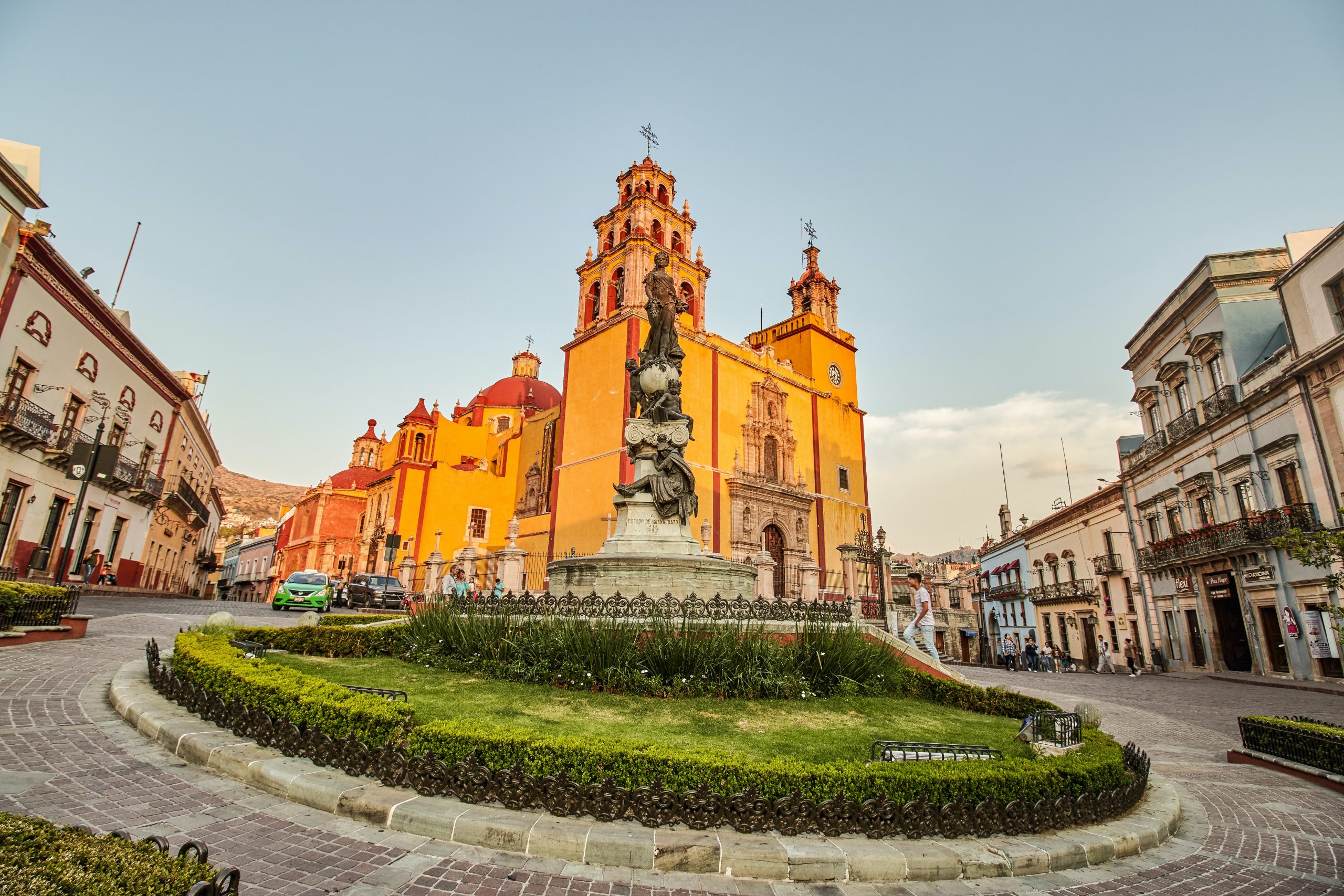 Last November, my husband, in-laws and I went to Guanajuato City and San Miguel de Allende to celebrate Day of the Dead. I had a fantastic time and loved every minute of our trip. We stayed at a beautiful hotel and spent most of our time in Guanajuato City, but we did venture off to San Miguel for a day as well. Here are some of the best things to do in Guanajuato for your next trip.

How to get to Guanajuato

You can get to Guanajuato via bus easily if you’re coming from Queretaro, Mexico City or other spots in the country.

Another option is to rent a car and drive there so you can take your time and make stops along the way.

The carpooling app Bla Bla Car can also be used to get around Mexico. Basically, people who are already going somewhere in their own car, list a free space in their vehicle for someone else to fill. You pay a fee to chip in for gas and carpool with them. This is sometimes cheaper than busing.

Guanajuato has an airport, so if you’re coming from further away, you can search for cheap flights here.

Where to stay in Guanajuato

I would highly recommend staying at Hotel La Abadia Tradicional. This is where we stayed and we loved it. It was beautiful, in a good location and had a pool.

Alternatively, if you’re looking for something more budget friendly or somewhere to stay where you can meet other travelers, you can browse hostels here.

Things to do in Guanajuato

Wander through the Colorful Streets

Guanajuato is famous for its winding alleyways and colorful buildings. I couldn’t stop taking photos just from walking around town. Everything about the city just has a special charm to it. Maybe that’s part of the reason why Guanajuato is a UNESCO World Heritage site.

Another incredible thing to do in Guanajuato is visit Diego Rivera’s home. This house-turned-museum is extra special because it’s actually where Diego Rivera was born. The museum is filled with some of Diego’s sketches and paintings plus other artifacts from his home.

There are many old silver mines and mine museums in Guanajuato that you can tour. The most popular mine you can visit is the Museo de Sitio Mina Valenciana. Other mines in the area include the Mina el Nopal and the Bocamina San Ramon.

The Regional Museum of Guanajuato

The Regional Museum of Guanajuato contains incredible murals throughout the staircases made by José Chávez Morado that depict Guanajuato’s history. Inside you will also learn about Mexico’s fight for independence against the brutality of colonization. It’s really an art museum, history museum, and anthropological museum all meshed into one.

One of the most interesting things about the museum is actually the building’s history. The ‘Alhóndiga de Granaditas’ building was originally built between 1798 and 1801 as a large grain storage facility. It was created to store grain in order to prevent famine if drought occurred.

On September 18, 1810, Spanish soldiers formed a defensive position in the building during the war. Silver and other wealth from all around the region were also barricaded inside. Led by El Pipila, a local miner who strapped a large rock to his back as armor, the Mexican rebels rushed into the building, killed the soldiers, and retrieved the silver within.

Go on an Alleyway Night Tour

There are so many hidden alleyways to explore in Guanajuato. One thing I would recommend doing is to take a nighttime walking tour through the alleyways. The tour guides often sing, dance, and put on a theatrical performance during these tours.

We went on a nighttime walking tour of the alleyways over the Day of the Dead long weekend so it was very crowded. However, it was still super fun. There was lots of music and dancing and we were given a free drink too! You can book these tours by simply walking around the city center in the evenings and booking with one of the many available tour guides. Alternatively, you can click here for a daytime walking tour.

See a Show at the Theatre

Once a hacienda and silver mining operational base owned by Captain Gabriel de la Barrera, this historic building is well worth a visit. The hacienda used to be home to Barrera, the silver mining tycoon, and his family.

Now, visitors can wander throughout the hacienda and enjoy several gardens. Each garden is themed after different landscaping and gardening techniques from different cultures. There’s an English garden, an Oriental garden, a Mexican garden, and a Roman garden. It’s the perfect place to relax, slow down and smell the roses.

Get a Photo at the Alley of the Kiss

One of the most famous things to do in Guanajuato is visit the Callejon del Beso or ‘Alley of the Kiss’. It’s located in a narrow alley, where two balconies from opposite sides of the alley nearly touch.

The story that makes this alleyway so famous is about two young lovers. Legend has it that Ana, the daughter of a rich Spaniard fell in love with Carlos, a humble miner. Her father forbade her to see him anymore after catching them kissing and locked Ana in her bedroom.

Carlos was determined to keep seeing her so he went to her house and noticed that there was a balcony across from Ana’s that almost touched hers.

Carlos went to the house opposite and asked to purchase the home. The homeowner increased the price many times but Carlos took all the money he had and paid for it.

He and Ana saw each other each night in secret, using their connected balconies until Ana’s father found them again and stabbed his daughter in her chest. Some say Carlos died jumping off his balcony in grief, others say he died trying to save Ana. Either way, the story goes that after he fell, he landed on the third step.

It’s now a superstition that if you visit the alley with your lover, you should kiss them on the third step so that you can have long-lasting love.

Ride the Funicular for a Great View

In my opinion, riding the funicular to get a sweeping view over the whole city is a must do when you visit Guanajuato. Funiculars are a type of transportation using kinds of cable cars that help transport visitors up steep inclines.

You can ride the Guanajuato funicular in the daytime or in the evening to see the city all lit up at night. The funicular is open from 8am to 9:30pm.

Once you ride the funicular, you will be able to see the Pipila Monument at the top. El Pipila’s real name was Juan José de los Reyes Martínez Amaro (1782–1863). He was the son of Pedro Martínez and María Rufina Amaro and he is one of Guanajuato’s local heros.

El Pipila was a miner who helped the Mexican rebels steal back silver from the Alhóndiga de Granaditas Building that had been occupied by Spanish soldiers in 1810.

Just a 20 minute Uber or 40 minute walk from the center of Guanajuato is Presa de la Olla. It’s a small reservoir and dam surrounded by hills and greenery. There are restaurants and food stands in the area and for just $40 pesos you can take out a row boat and paddle around the reservoir. It’s a great way to escape the hustle and bustle of the city center.

There are plenty of cute shops all throughout Guanajuato that sell beautiful textiles and other souvenirs. You will see many of these shops by simply walking around town. One shopping center to make sure you add to your list is the Mercado Hidalgo, which is a large market filled with everything from flowers, to local produce, clothing, and souvenirs.

Celebrate Day of the Dead

Guanajuato is an incredible place to celebrate Day of the Dead. Day of the Dead, or Día de los Muertos happens every November 1 and 2 annually. It’s a time when ancestral spirits are believed to visit living family members.

When I went to Guanajuato during Day of the Dead there were beautiful tapetes and ofrendas everywhere! Tapetes are tapestries made of flowers, corn husks, pinecones, leaves, beans, and other things that get laid out on the ground outdoors for visitors to admire. During Day of the Dead they often depict calaveras (skulls) and other holiday imagery.

Ofrendas are often set up in peoples’ homes to honor those who have passed away in the family. Typically Mexican marigolds, sugar skulls, decorations, food, and drink will sit on the ofrenda, along with photographs of deceased family members. When I was in Guanajuato we were able to see many ofrendas in Mercado Hidalgo honoring the families of shop owners.

Go on a Day Trip to San Miguel de Allende

If you visit Guanajuato then I would highly recommend making a day trip (if not more than one day) to visit San Miguel de Allende. There are lots of excellent restaurants, stunning architecture, a vibrant art scene, lots of museums, and cozy cafes to enjoy in San Miguel. San Miguel de Allende is also a UNESCO World Heritage site you don’t want to miss out on!

Why is Guanajuato so popular?

How many days should I spend in Guanajuato?

Guanajuato is a truly incredible city. If you spend two to three days in Guanajuato, that should give you enough time to see the main highlights. Make sure to give yourself extra time in the province to visit nearby San Miguel de Allende too!

What food is Guanajuato known for?

You can eat many delicious Mexican foods in Guanajuato such as enchiladas, stuffed chiles, tamales, and empanadas. The dish Guanajuato is most known for, however, is enchiladas mineras. Filled with onions, cheese, sauce, carrots, and potatoes, women used to take these enchiladas to their husbands who worked in Guanajuato’s mines.

Why isn’t the Mummy Museum included in the list of things to do?

The Guanajuato Mummy Museum is a very popular tourist attraction and is recommended to visit on most other travel blogs. However, I personally didn’t feel right including it. I have a lot of questions about ethics when it comes to this kind of stuff and I found out after my visit to Guanajuato that there is a lot of controversy surrounding this particular museum and where the mummies actually come from.

6 thoughts on “14 Incredible Things to do in Guanajuato”