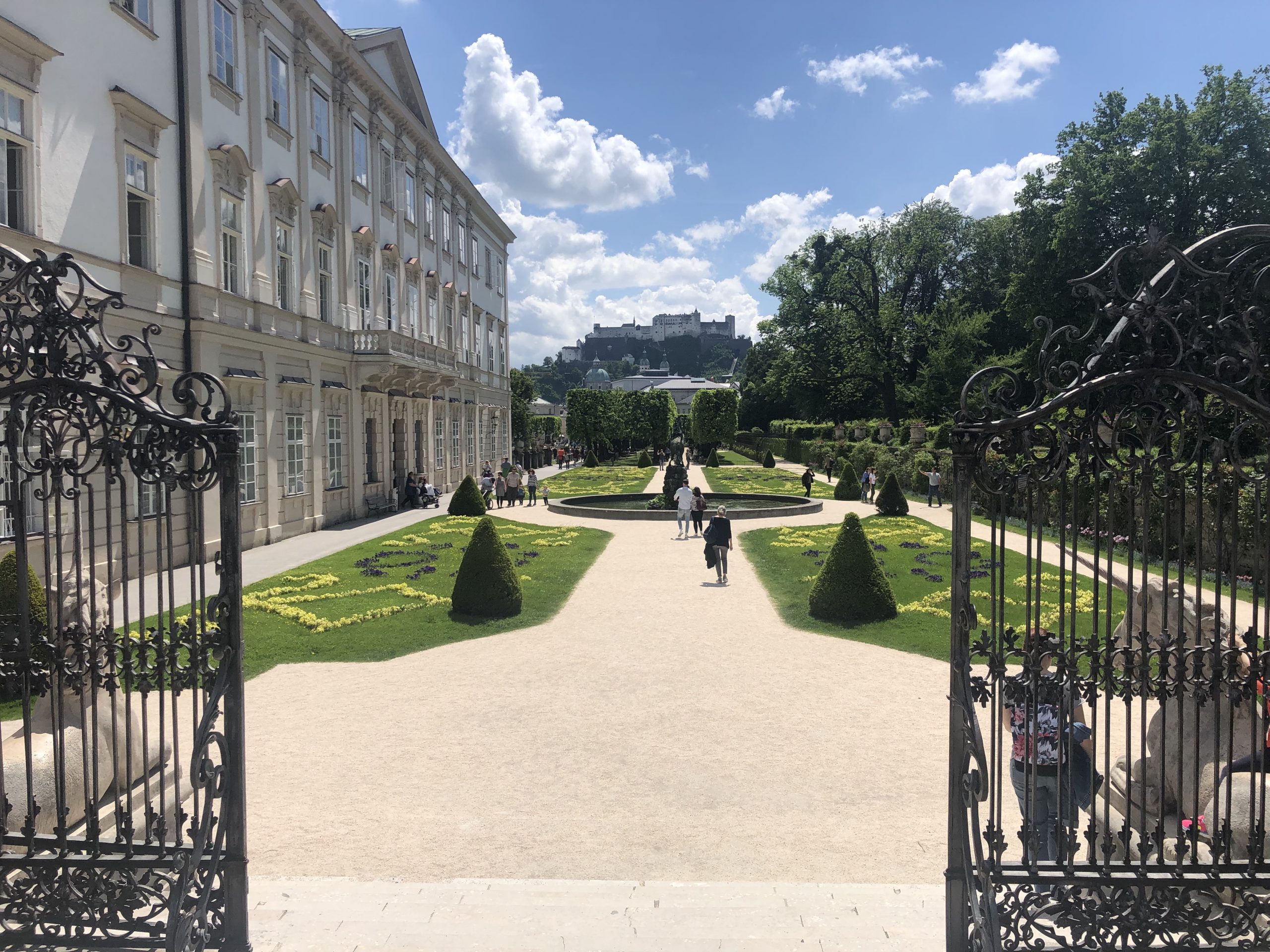 This post includes details about all the film locations I was able to see on a short day trip plus other film locations to visit if you have more time. I’ve also included many other travel tips for Salzburg in general, like how to get around, where to eat and other cool cultural activities.

Interesting Facts About the Sound of Music

How to Get to Salzburg from Vienna (and other cities)

When I visited Salzburg I did it as a day trip from Vienna. To get there I took a short, 2-hour train ride. If you’re planning Salzburg day trip from a nearby city I’d highly recommend searching for trains here or searching for buses here. I did a few day trips from Vienna and going to Salzburg was cheaper by train when I went but it all depends on when you go and where you’re traveling from.

How to Get Around Salzburg

If you have limited data on your phone, I would highly recommend downloading the app, Maps.me, and downloading the Salzburg map before your trip. I personally like to drop pins of places I want to see on the map so that I can easily plan where to go and when.

Salzburg is a very walkable city. I spent most of my day walking from place to place. Personally, I think that walking is one of the best ways to get to know the layout and feel of a city anyway.

Aside from walking most of the day, I only took one bus ride. It was to Hellbrunn Palace, one of the Sound of Music film locations, which was a bit further outside of the center than most other spots.

There are plenty of tours that take visitors to see and sing their way through the different Sound of Music filming locations by bus. I chose not to do one of these tours for three reasons. The main reason was that I wanted to save some money and figured I could just find the locations myself. The second reason was because I didn’t want to have to battle tour crowds for photos. And the last reason was because I only had one day there and I wanted to see more of the city in addition to the filming locations.

I definitely don’t think there’s anything wrong with the tours though and they seem really fun from what I saw. If you have more time in Salzburg or don’t want to do as much walking, you can book a Sound of Music tour here.

Schloss Mirabell, or Mirabell Palace, is a gorgeous palace and also home to some beautiful gardens. It was constructed by prince-archbishop Wolf Dietrich in 1606 for his mistress, Salome Alt.

There are two iconic Sound of Music spots at Mirabell Palace that you’ll probably recognize instantly. Both the gate and the Pegasus fountain from the scene where Maria and the children sing ‘Do, Re, Mi’.

Hellbrunn Palace is a bit further away from the city center and the other Sound of Music film locations so I recommend taking a bus to get there. However, if you have more time to spend in Salzburg you can also take a boat tour to Hellbrunn. After walking around the beautiful gardens and sunshine-yellow palace, you can visit the famous Sound of Music Pavillion.

This was the Sound of Music film location that I was most excited to see in Salzburg. As any Sound of Music fan will know, the pavillion played an unforgettable role in the ‘Sixteen going on Seventeen’ scene with the characters Liesl and Rolf.

After filming the movie, the pavillion was gifted to the city of Salzburg. The filming of the scene with the pavillion was actually shot on the grounds of Leopoldskron Palace but was restored and later moved to Hellbrunn in 1991.

Stiftskirche Nonnberg, or Nonnberg Abbey, is the famous abbey that Maria lived at as a nun in the Sound of Music. You can visit and walk inside the chapel. I got really lucky when I visited and was the only one there! I think it was because it was a weekday and I probably just managed to get there between tours. The interior of the Abbey was redone a bit for the movie but the exterior is the same.

The Felsenreitschule Rock Riding School is where the talent show scene from the Sound of Music was filmed. It’s still an important concert venue today with seating for up to 1437 people! There are daily tours of this incredible theatre at 9am and 2pm. You can find out more information about the tours and book tickets here.

While no scenes from the Sound of Music movie were actually filmed here, Villa Trapp was the real home where the Von Trapp family used to live. While it used to be open to the public as a hotel and restaurant, it looks like you may now only be able to view it from the outside since some online digging shows that it is ‘permanently closed’.

Other Things to Do, See & Eat in Salzburg

I didnt’ have time to go inside Mozart’s Birthplace but you can pay to enter. It costs €12 to enter but children, students, seniors and large groups can get discounts.

Even though I didn’t go inside the building it was very cool just to be there and see it from the outside. The Mozart family resided on the third floor of this yellow building from 1747 to 1773. Wolfgang Amadeus Mozart was born there on January 27 of 1756.

Cool off at the Trick Fountains at Hellbrunn Palace

If you have extra time when you visit Hellbrunn Palace, make sure to buy tickets to the Trick Fountains experience. When you visit you can enjoy grottos, beautiful water fountains, water-driven figurines, and even optical illusion fountains. All of these were created by Markus Sittikus and are totally unique. The experience is also a great way to cool off in hot weather.

The Makartsteg Bridge is one of several bridges that crosses Salzburg’s Salzach River. It’s also become a love lock bridge over time! If you don’t already know, a love lock bridge is a bridge that couples can secure a lock onto in representation of their lasting love for each other. Some of the locks are in the shape of hearts and others have etched or engraved initials and dates on them. If you visit with your significant other, you can also add your own lock to the bridge!

Visit a Salt Mine

There are multiple salt mines and salt mine tours that you can choose to visit near Salzburg. The most popular (and closest) salt mine to visit is the Hallein Salt Mine. The Hallein mine was in operation for 800 years. It’s actually the world’s oldest show mine and first opened to travelers and visitors in 1607!

Another nearby salt mine, located just across the border in Germany, is the Berchtesgaden Salt Mine. If you tour this salt mine you can actually ride a boat underground!

I don’t remember what the German name of the dish I got was but it basically consisted of potato and leek filled giant pasta with sauerkraut and chives. It was seriously delicious! Plus I really liked the ambience of the restaurant.

If you visit Salzburg on a hot day, grab an ice cream to cool off from Eis Griessler. Eis Griessler is an ice cream chain that has lots of flavors and even some vegan options. Other Eis Griessler locations can also be found in many other cities in Austria. I personally love their vegan dark chocolate flavor!

Author: April
Filed Under: Travel
29 Fun Things to Do in Vienna, Austria
How to Spend One Day in Brno, Czech Republic