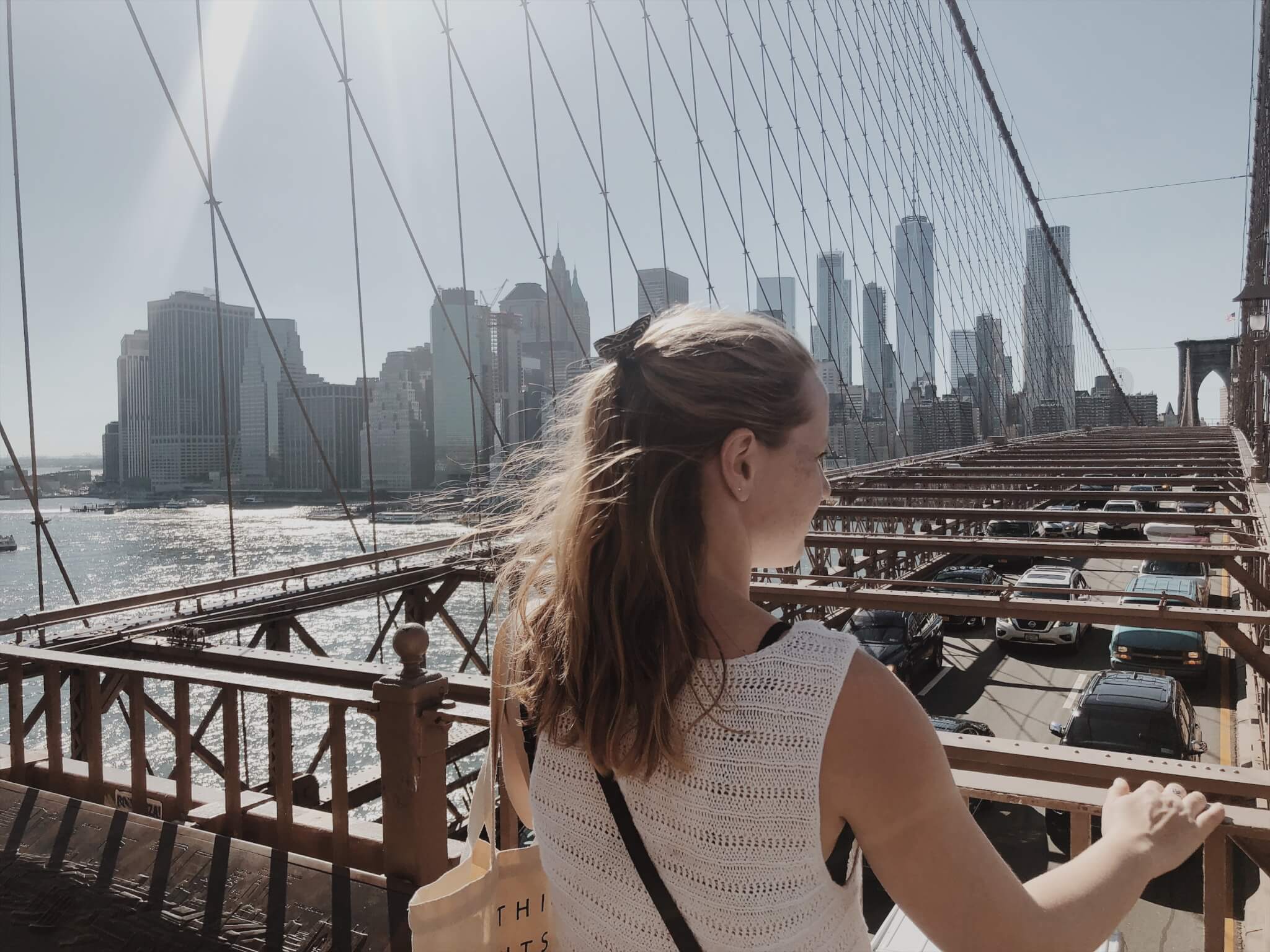 Last month my husband, Arturo, and I went on our honeymoon to New York City. Arturo had been once before last Christmas with his family but it was my first time in the Big Apple. We had four precious days to spend in the city and we wanted to make the most of it. Even though I was battling a cold, we still managed to see and do a lot by tackling NYC one area at a time. Of course, with just four days there was no way we were going to be able to see or do even close to everything the city has to offer but I think we scratched the surface fairly well with this jam packed four day NYC itinerary… If I do say so myself.

Where we Stayed: Introducing the Hotel Mela near Times Square

The Hotel Mela was quite lovely. It was in the perfect area right near Times Square and the bed was super comfortable. The staff were quite friendly and helpful whenever we had questions about the area too. Our room was a little smaller than the photos online made it seem but it was just what we needed after our long days of adventuring.

You can find more amazing deals for where to stay in New York City here!

Transportation: How we Got Around the City

Whenever you see a movie set in NYC you often see someone hail one of the hundreds of taxis available throughout the city. Since we aren’t movie stars, we couldn’t afford the taxi way of life so we opted for other modes of transportation instead. Wherever we went we either walked (50km in four days by the way!) or took the subway. My favorite ways to travel and get to know a place is by learning the public transportation system well and by walking and we did just that. This ended up being much cheaper than taking taxis or Ubers and it was a little more eco friendly as well.

NYC in the Summer: A Note on the Weather

For some reason, even though we knew it was summer, neither of us were prepared for how hot it was in NYC during the month of June. Personally I am much more used to dry heat but New York City was humid as hell. We couldn’t leave the hotel without sweating buckets and that made all the walking we did a little harder. However, I would much rather have it be hot than cold and I loved soaking up all the sunshine. Just remember if you go to NYC in the summer, bring a water bottle and reef safe sunscreen.

We arrived in the early evening on our first day in the city. After checking into Hotel Mela, we wandered not too far off to the Brooklyn Diner for burgers. I was so excited to come to NYC as a vegetarian because I had heard it’s one of the most veg friendly cities in the world. I had a veggie burger at the Brooklyn Diner and it was one of the best I’ve ever had.

After dinner we walked to the Bethesda Fountain in Central Park. We got there just as the sun was setting and it turned into a really beautiful night. We were both pretty tired after our long journey from Mexico City so after enjoying the sunset, we wandered back to Hotel Mela by way of Times Square. 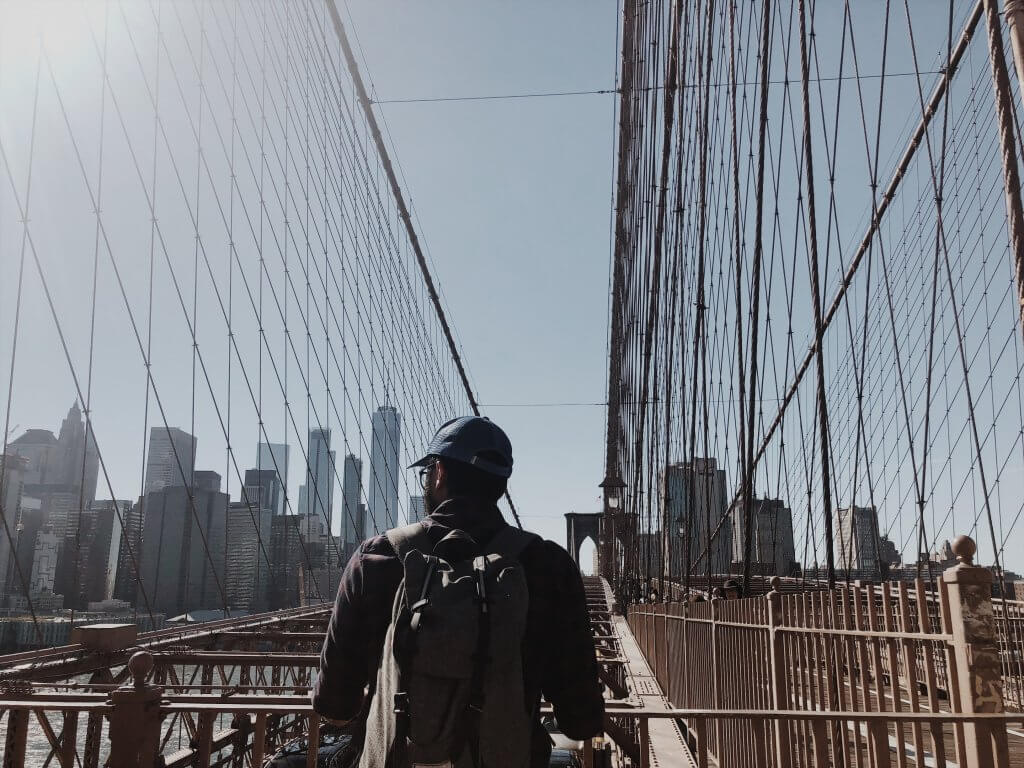 Visiting the Brooklyn Bridge was a huge highlight for both of us.I was extra excited to explore Brooklyn since there were so many sustainable things to do and see there. We started off our day in Brooklyn by visiting The Package Free Shop and Zero Waste Daniel. Package Free Shop is one of the most beautiful zero waste stores I have ever seen. It was started by Zero Waste icon, Lauren Singer, who has all her trash from the last four years fit in a tiny mason jar. She is also the founder of The Simply Co and Trash is for Tossers. Zero Waste Daniel is a fashion line started by designer Daniel Silverstein. He makes all his clothes from discarded fabric scraps that he gets from factories in NYC.

I bought a tote bag at Package Free Shop because it’s the one thing I can’t stop collecting, and I bought a shirt at Zero Waste Daniel. The highlight of going to these two places was meeting Daniel Silverstein at his shop! Needless to say I was a little starstruck. Daniel was so nice and even gave Arturo and I a list of recommendations on what to do and see in the city.

We also walked across the entire length of the famous Brooklyn Bridge, visited the World Trade Centre memorial site, checked out the Comedy Cellar, the apartment building from ‘Friends’, ate at Eataly and spent the evening in Washington Square Park. We also got some delicious vegan ice cream at a place called Van Leuwen Ice Cream. Needless to say our day in Brooklyn was the most jam packed of all our days in NYC.

I thoroughly loved every part of what we did but visiting the World Trade Centre memorial shook me quite a bit. I remember I was in my classroom at school during 9/11 and our teacher turned on the TV as we watched what was happening. I’m not even American and I was so young but I still remember exactly where I was when it happened. The saddest part of the memorial was all the white flowers placed by people’s names. Each white flower was placed next to a name on what would have been that person’s birthday and I think that’s what shook me the most.

We definitely didn’t have time to go to all the museums we would have liked to but we were able to visit a few. After having breakfast we headed off to the Metropolitan Museum of Art and the Frick Museum. We unfortunately ran out of time to go to the MOMA but decided to save that one for next time.

We probably could have spent the entire day in the Met and still not seen everything but we saw a fair amount. My favorite exhibits were the sections on Ancient Egyptian and Asian art.

We got really lucky by choosing to go to The Frick Museum on a Wednesday. Apparently every Wednesday between 2 and 6pm you can pay what you wish at the Frick. Regularly it’s $22 per ticket so we were able to save a little money by fluke!

After all our museum hopping we were pretty hungry so we headed to Beyond Sushi for some of the most delicious vegan sushi I’ve ever had. After that we went to a comedy show at the Fat Black Pussycat. We decided to see a comedy show instead of seeing a show on Broadway because it was a little cheaper and we both love comedy. The tickets only cost us $12 and by another fluke we were able to get front row seats to see Gabby Bryan, Mike Suarez, Stavros Halkias,

We were lucky to find out that Lauren Singer, amongst other environmentalists in NYC were holding a Ban the Straw rally outside City Hall. It was really cool to see so many people coming together to get New York City to ban disposable plastic straws city wide, even though we arrived pretty late. We didn’t have time to testify in court but I got to meet Lauren Singer who has been a huge eco-inspiration to me.

After hanging out at the Ban the Straw Rally for a bit we marched off towards the Staten Island Ferry terminal. Neither of us wanted to go right up inside the Statue of Liberty but we did want to see it so we took the ferry back and forth to catch a quick glimpse. It was beautiful and the Staten Island Ferry was free which was a huge plus as well.

Afterwards we ate some more amazing vegan food at a few different places and then visited the Flat Iron Building and caught a glimpse of the Empire State Building as well. There was a huge area outside the Flat Iron Building where we were actually able to have a beer outdoors and just people watch for a while. For dinner we set off to the Hangawi Korean Restaurant that my friend Rebecca recommended and it was one of the best meals I’ve ever had in my life. Everything was vegetarian and even my carnivorous husband thoroughly enjoyed his meal. Now since coming home to Mexico City, we are just trying to figure out how to recreate that incredible food.

Things We Want to Go Back to NYC For

We had a super jam packed four days in the Big Apple and really want to return to see even more. Here are some of the things we want to do next time we’re there:

Did we miss anything else? If you’ve been to NYC before and think there’s something we should add to our list for next time let us know in the comments! If you haven’t been to NYC before we hope this NYC itinerary helps you plan your next trip.

Author: April
Filed Under: USA
20 Photos of the Bushwick Street Art in NYC that’ll Make You Want to Visit