Our Engagement Story: How He Proposed in Mexico City 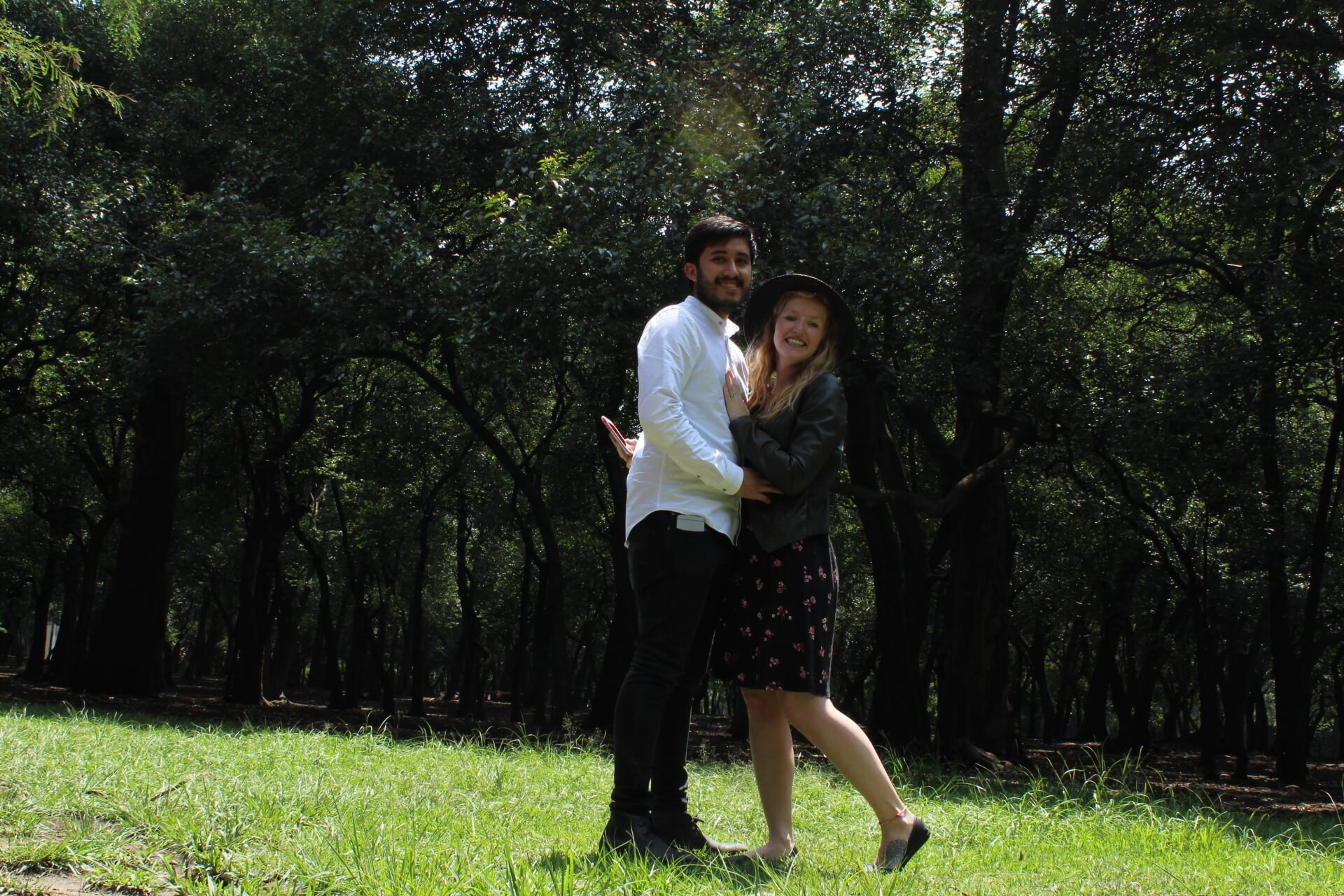 ARTURO AND I ARE ENGAGED!!!

I am so excited to share with all you lovely readers, our Chapultepec Park engagement story. If you’ve read any of my blog posts within the last year and a half you may have seen Arturo’s name (or photos of him) pop up here and there. We have been dating for just over a year and half and are very much in love. I first realized that Arturo was ‘the one’ when he gifted me a huge book full of all different kinds of maps that he saw me eyeing at Chapters one day. On the inside he wrote, “I can’t wait to see the world with you.” This was super early in our relationship and it was extremely exciting for me to know that I had finally found someone who shared my passion for travel, was kind beyond .

We actually started dating right after I got back from traveling Thailand for a month and right before I was set to move away. I had been living in Kelowna, BC for almost my whole life and was starting to feel trapped. My friend and I had just traveled all over Thailand together and had plans to move to Victoria in late January.

Arturo and I started dating about two weeks before I moved. I remember telling him that although I really liked him and wanted to make things work, I was not willing to stay in Kelowna when our relationship was so young. We decided to try long-distance because you really never know if it will work until you try. Arturo never tried to hold me back from moving away. He even encouraged me to move as he knew a new city would be good for me in so many ways. This only made me fall for him even harder.

We dated long distance for just over a year. Every time we got to see each other we made plans for when we would see each other again so we always had a date to look forward to. Being apart wasn’t always easy but the times we got to visit each other made everything worth it. We explored Kelowna and Victoria together and I got to visit Arturo and his family in Mexico City last year for ten days as well. Now I have been staying with his family since April here in Mexico City and I couldn’t be happier.

We decided that as of April this year we would no longer be separated by distance. Due to this we have been traveling through Mexico all summer so far and will both move back to Kelowna in the fall. Arturo has one more year left of school in Kelowna and I will be staying with my family to save money for our wedding.

Our Engagement Story: How He Proposed in Mexico City!

Now for the fun part! Arturo and I were going out for lunch on July 2, 2017 when we decided to walk through Chapultepec Park for a bit. The park is a forested area right outside the National Anthropology Museum (my favourite museum in Mexico City). I had just got a new camera (Canon Rebel EOS T6) that could be controlled via smartphone. We decided to set it up and take photos of ourselves in the park.

When Arturo suggested that we just take a video and then take screenshots after I knew he was about to propose. I told him not to take a video because I was too excited and just wanted him to ask me already! Sure enough he got on one knee, told me how much he loved me and asked me to marry him. I said yes immediately. He slid the most beautiful topaz ring onto my finger as I stood there simultaneously giggling and crying.

Afterwards we hopped in the car and drove to a restaurant called Nueve Nueve to celebrate our engagement. I couldn’t sit still at all during the ride over. I was just way too excited! The food at Nueve Nueve was amazing and the atmosphere was perfect as well. I’ve never had such a fresh and bright meal. Arturo ordered a perfectly cooked steak and I had the tastiest seared tuna ever. My mouth is watering just thinking about it. Plus the restaurant is situated inside a large, bright green garden making the atmosphere both peaceful and romantic.

Our Engagement Story: Celebrating With Our Families

I sent my family some photos as soon as we reached the restaurant. They were busy packing to come visit the next day so Arturo really planned everything perfectly. The next day my family arrived and our families got to meet for the first time. We took them around Mexico City and celebrated everywhere. We took them to countless museums, to the Pyramids of Teotihuacán and more. It was probably one of the best weeks of my life. At the end of the week we threw a party so that Arturo’s extended family could also meet my family. At the party we surprised Arturo’s extended family with the news of our engagement and everyone was thrilled! People laughed and cried and congratulated us non stop.

I mentioned earlier that we took both our families to Teotihuacán the week that they visited. It just so happened that we ventured out to the famous pyramids on July 6, 2017, as well. Why does this date matter? At first I didn’t think it mattered at all but luckily Facebook reminded me that it was exactly one year ago that we had gone to see the pyramids for the first time. Last year I was really anxious about the altitude affecting my asthma. Due to this we decided to climb only the Pyramid of the Moon, which is the smaller of the two beasts.

Our Chapultepec Park Engagement Story: We Are So Excited!

I am so excited to be able to marry my best friend in the world! Not only that but now I have finally secured for myself a permanent travel partner! We are overjoyed at the fact that soon our two beautiful families will become one. And we’re also extremely excited to plan a bilingual wedding. Thank you for reading this and in doing so sharing in our joy and excitement for our engagement!

It doesn’t matter where you’re going, it’s who you have beside you.

6 thoughts on “Our Engagement Story: How He Proposed in Mexico City”